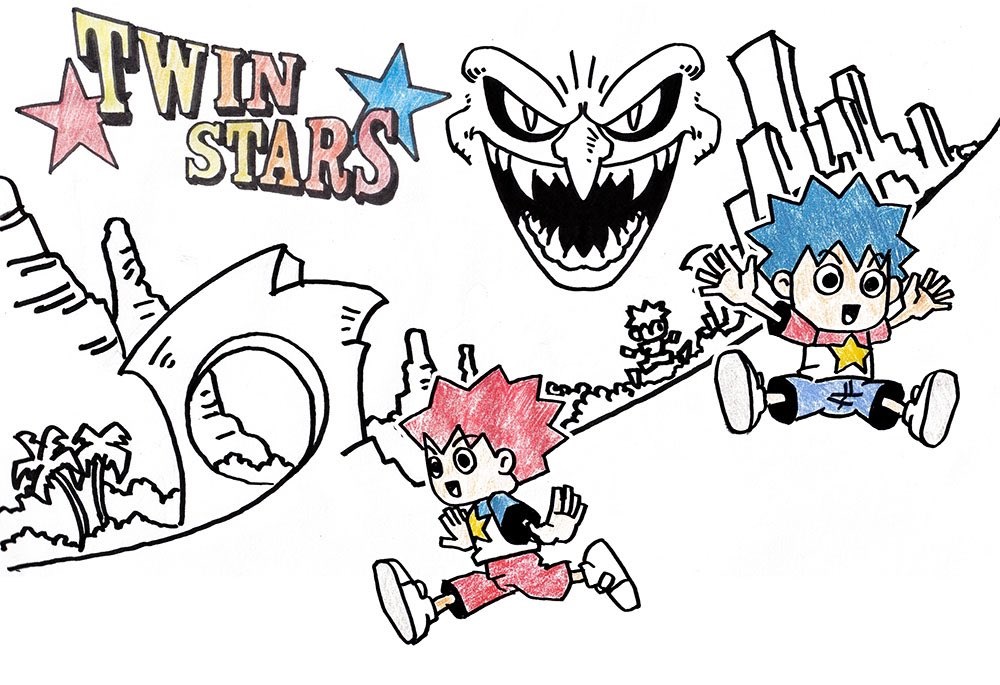 Looks like the series’ iconic loop-the-loops were always a thing even before they settled on Sonic being a hedgehog (pic: Twitter)

Potentially the oldest known concept art for the first Sonic The Hedgehog game has been shared by the original character designer.

Die-hard fans of Sonic The Hedgehog have long known that Sega’s blue mascot didn’t start out as a hedgehog. Other animals were considered such as a rabbit that could grab enemies with its ears.

It’s now transpired that, at one point, Sonic wasn’t even an animal at all nor a single character, but a pair of spiky haired human twins.

This comes straight from Sonic’s character designer himself, Naoto Ohshima , who shared an old draft and concept art of the original game on social media.

This project was titled Twin Stars and would’ve seen the twins protect a dream world from a invading nightmare enemies.

In the background of one of the art pieces, you can see a familiar looking loop-the-loop that would become commonplace throughout the Sonic series. One of the twins also had blue hair though it’s unclear if Sonic’s final design was at all influenced by this.


When asked by a fan if Twin Stars can be considered the earliest prototype for Sonic, Ohshima explained that when he submitted the project, ‘only smooth maps and loops and runs were approved.’ So, it sounds like the idea of a fast-paced platformer was always part of the plan.


First, I make a draft by myself, get approval from the company, and then the project starts. The original draft at that time was Twin Stars. However, only smooth maps and loops and runs were approved. After starting the project, I thought about various characters. — Naoto Ohshima (@NaotoOhshima) January 21, 2023


Twin Stars has also drawn comparisons to the Nights games, which featured a similar premise of a dream world plagued by nightmares and dual protagonists.

Ohshima was the first game’s director and character designer too, though he describes Nights as ‘irrelevant’ since Twin Stars was conceptualised in 1989, seven years before Nights Into Dreams released.


There’s been an interesting trend as of late of Sonic staff members openly discussing behind-the-scenes details. For example, Sonic Frontiers ’ director, Morio Kishimoto, has regularly responded to fan questions about the game, recently admitting he’s considering replacing the boost formula for his next title.

More: Gaming DualSense Edge review - the best controller ever made Games Inbox: Will the Nintendo Switch 2 be as powerful as the PS5? PlayStation 6 rumours begin as insider puts PS5 Pro theories in doubt

Another fan asked him if online co-op or multiplayer will ever be added to future games, but it sounds like it’s not much of a priority since there’s still work to be done on Sonic Frontiers.

‘I believe that it will be difficult to move on to the next step without first completing a third-generation Sonic game in single-player mode,’ he said (via Google Translate). ‘As you know, [Sonic Frontiers] still has a lot of issues, so we can’t leave it alone.’

MORE : Sonic Frontiers to get new playable characters and modes via free DLC