25-9-2020 Games Online Metro Uk News 74 Print this Page
A current gen version would have less fancy visuals but would probably be just as scary (Pic: Capcom)

According to the game’s producer, Capcom is looking into bringing Resident Evil Village to current hardware, but it’s not guaranteed.

Since its announcement for PlayStation 5 , Xbox Series X, and PC, there has been plenty of excitement surrounding Resident Evil 8 or, as it’s officially known, Resident Evil Village .

Fans have been hungry for new details and, while its presence at the Tokyo Game Show earlier today didn’t yield anything major, we have now learnt that it may not be a next gen console exclusive after all.

According to producer Tsuyoshi Kanda, Capcom is considering making versions of the game for the PlayStation 4 and Xbox One consoles.

‘While Resident Evil Village is being developed specifically for next generation consoles and PC, we’re looking into delivering the experience on PlayStation 4 and Xbox One as well,’ said Kanda, via a translator.

This isn’t a guarantee, however, with Kanda adding, ‘We’re looking into it, but we can’t make any promises. However, we will do our best in creating a top-tier survival horror experience on current generation consoles.’

Doesn’t matter if it’s on current gen or not, Chris stomping into your house and shooting your wife is still rude (Pic: Capcom)

Having the new Resident Evil on current hardware will certainly be appealing to some, especially those that may not be able to afford one of the new consoles.

If it does release on PS4 and Xbox One, there’s also a chance Capcom will offer free upgrades to their next gen equivalents, but that’s not a guarantee either.

More: Lifestyle When should you start your Christmas shopping? What time is The Great British Bake Off: An Extra slice and who presents the show? BTS forced to cancel first in-person concert since coronavirus pandemic began

Resident Evil Village continues the story of Ethan from Resident Evil 7 , who has his peaceful life turned upside down when series veteran Chris Redfield arrives at his home.

Resident Evil Village will release on PlayStation 5, Xbox Series X, and PC in 2021. 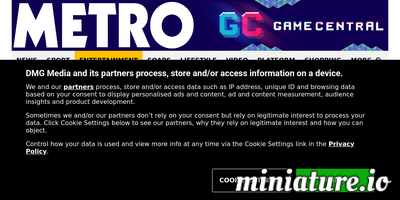