10-9-2019 Sports Online This Weeking Gambling 109 Print
Less than two years after the Supreme Court opened the door for expanded regulation, Caesars sports books have expanded to seven states. The company is also the official supplier of odds information for ESPN and Turner Sports, which have broadcast studios at The LINQ Hotel & Experience and Caesars Palace in Las Vegas Strip. Since last August, Caesars has expanded its sports betting footprint from only Nevada to include New Jersey, Pennsylvania, Mississippi, Iowa, Indiana and New York, boasting 29 locations. More at YogoNet.
The post Caesars Sports Books Now in 7 States appeared first on This Week in Gambling . 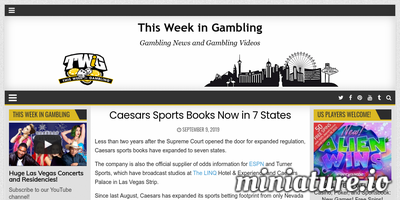